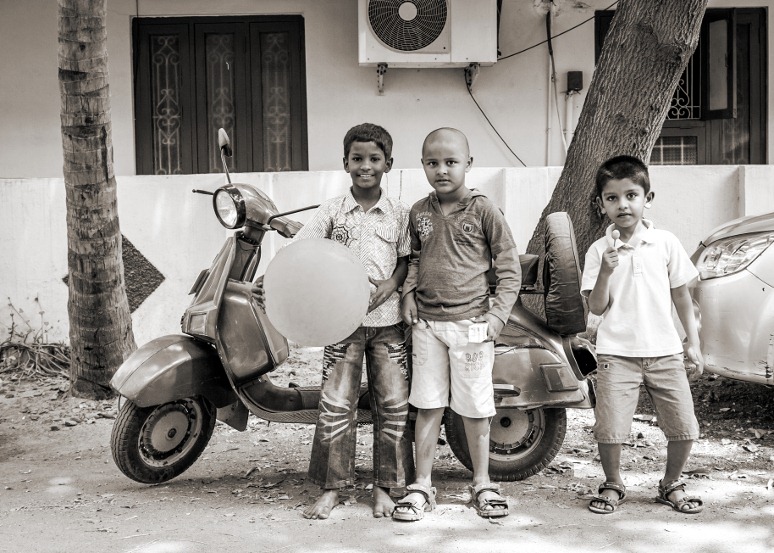 For the past two years , every time I visit India, apart from the objective of visiting friends and family and having a vacation, I also wish to capture some good pictures. Walking around the streets with a camera around your neck and trying to shoot whatever interests you is a strict ‘la’ here in Qatar. Photographing state property and people that clearly identifies them is non. So I try and quench my street-shooting thirst whenever I travel.

The above snap takes me back in time, some 25 years. Every summer I used to have two breaks, to visit relatives from my mom’s side of the family as well as my dad’s side of the family. My paternal granddad was a big influence on me. He was a very hard-working successful farmer. Every day, when I finish brushing up and the daily bath, he would give me 5 paise (a tenth of a cent). That would take care of my snack needs!! I would then meet my friends, who kept changing every passing year, and would go roaming around the few streets and the paddy fields with their numerous snaking irrigation canals.

Some days we would go fishing along the main canal. Every summer I would have to make a new fishing line with a bamboo stick connected to a nylon line with a fishing hook. The hook would cost 5 paise and had to be tied to the end of the line using a special knot that would not slip easily. Fishing used to be great fun with friends. We used to catch all types of fish, and some of the days shrimps too. The shrimps don’t eat the bait. They actually hold the bait using their tentacles and the float tied to the line would gently dip like it is vibrating. It is a great skill to catch a shrimp using a fishing line, as you have to gently lift the unsuspecting shrimp out of the water. It may ley go of the line any second and you would never see it again. Every time we catch a shrimp, a loud cheer would go and everyone would want to have a look at the catch. In general, we would catch lots of catfish and after a few days our palms would be swollen with catfish barb marks. Every evening we would split the catch and each of us would easily end up with a few kilos of fish. My grandma would never cook the local fish and would give it away to one of the housekeepers.

There are times when I would visit gramps during the Christmas break. It would be raining most days and there would be no fish in the water. We would then go hunting for lizards and snakes. There are many occasions when we would chase the snakes across paddy fields with a stick in our hand. The snakes would be terrified and slide effortlessly across the fields. We would run madly behind the snakes splashing a lot of water everywhere. Once we found a cobra trying to eat a frog. The frog was dizzy from the poison and couldn’t get away. The cobra was actually waiting for the frog. We were waiting for the cobra to finish the meal. Once the frog was in it’s belly, it couldn’t get away from us as it was sluggish with a full stomach. That was the only time we found a cobra and killed it. It was on display, hanging on a corner tree, for a few hours and the crows finished it off.

These days we live in the city and do not let the children go anywhere alone with friends. So when I saw these three kids having a ball together on the streets, I felt as if I had grown that much younger. I can’t wait to tie my own fishing line and go fishing with my friends. I know the patches along the canal-banks where the earthworms abound, rich bait for the fish. You need to dig early in the morning otherwise you just get sand. Do I realize that there are no fishes in the canals any more? In fact there is no water flowing through the canals in summer.

One thought on “We are the Boys!”